Earlier in the year I purchased a few tickets on Flysafair‘s third birthday sale for R3(inclusive each way) no strings attached so a round trip to Cape Town cost R6.00 you can’t even buy a bottle of water for that price – let alone a bottle of water on a flight. Although buying tickets that far in advance has it’s down side…a week before my trip I was reminded about the flights. Usually, meticulous planning is my thing, from times, dates, kilometres and even the animals I’d plan on seeing this time was a little different. Fortunately, good friend Andries Cilliers who’s based in Durbanville in the Northern Suburbs of Cape Town is always up for a quick trip and we made some last minute accommodation plans and it was set. 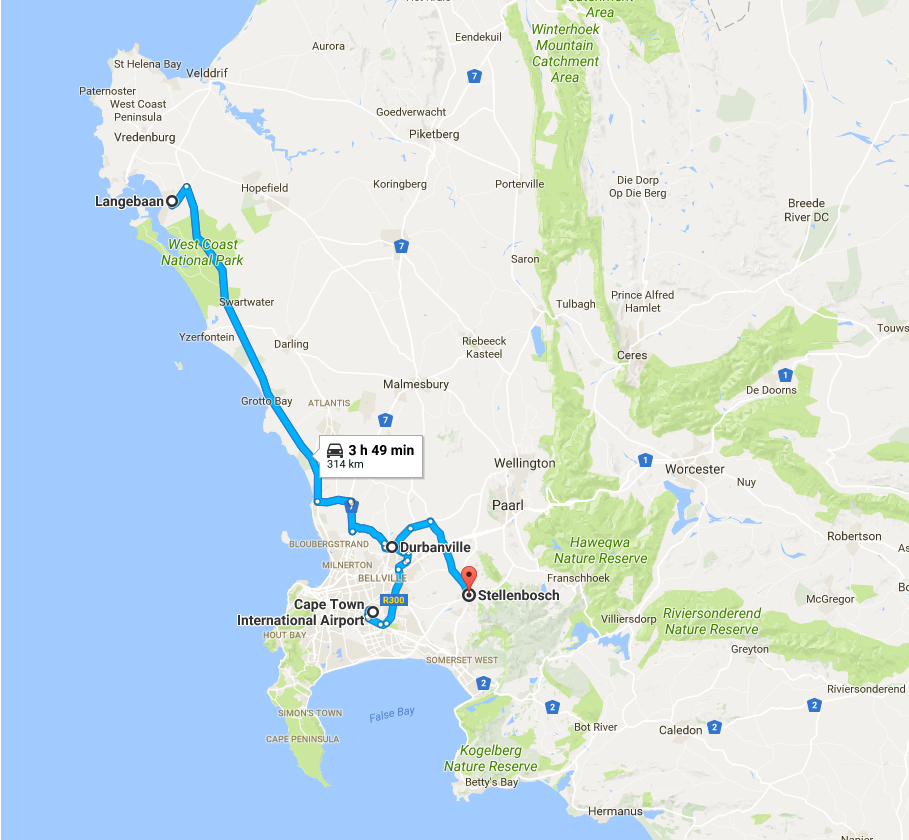 After arriving at a rather cold and damp Cape Town, we didn’t waste much time and set out to photograph some Cape Dwarf Chameleons in the nearby hedges and ivy covered walls around where Andries stays. Much like most of the Dwarf Chameleons around South Africa they’re incredibly well adapted to thrive in suburban environments and in well-planted gardens and hedge rows these secretive animals can be plentiful, although they’re heavily affected by domesticated cats. Some light rain and low temperatures didn’t prove a damper on our search and we turned up 5/6 Cape Dwarf Chameleons in quick succession.

Andries noted there’s a resident “bright green” Cape Dwarf Chameleons he’d seen before but the animal was about 8/9 meters up a tree and true to that we spotted the animal but there was simply no way of getting near the animal for photos – it was just too high up. Nothing quite as frustrating as locating these animals and just not being able to get to photograph them being just out of reach.

We noticed a few of these new borns in the very same tree, thankfully they were within arms reach and were able to grab a few photos of them although at this size they all look pretty much identical.

After another few minute searching Andries had spotted this nice example of what these chameleons should look like, he quickly climbed up the tree and retrieved this for a few photos.

With a major tick on my list for the trip already done within the first two hours of the trip I couldn’t complain about that. After a few more photos we started to plans for Saturday morning where we’d meet with another friend Theo and we would make our way to the West Coast National Park  our last visit proved to be a bit under whelming with the prolonged periods without rain had certainly kept the reptiles in short supply. We were hoping tomorrows trip would be different.

We left Durbanville at around 7am still dark and driving through heavy mist, I was hoping this wouldn’t be set the tone for the day. Around 125kms later we had reached out destination and hopefully going to make a success of it. 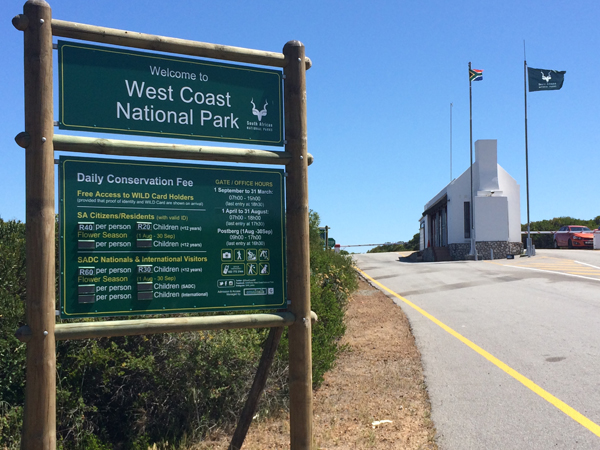 We arrived at our first spot dew still thick on the grass and a chill in the air. The first hours or so was relatively so and in terms of cover and structure, there isn’t much to be found. The first animal I found for the day was the often overlooked Cape Skink I say that as they’re extremely abundant across much of the Eastern and Western Cape and I seldom actually photograph them.

In this particular are it’s known to be a great spot for the Namaqua Rain Frog (Breviceps namaquensis) but sadly we couldn’t see them get it it right. Being in the right habitat, with the right conditions but finding a frog the size of a brusselsprout is all together another thing. Although we manages to find two other frogs in the same niche habitat as the Rain Frogs so the time searching wasn’t totally in vain. Along with the two Cape Sand Frogs and some Dwarf Burrowing Skinks. 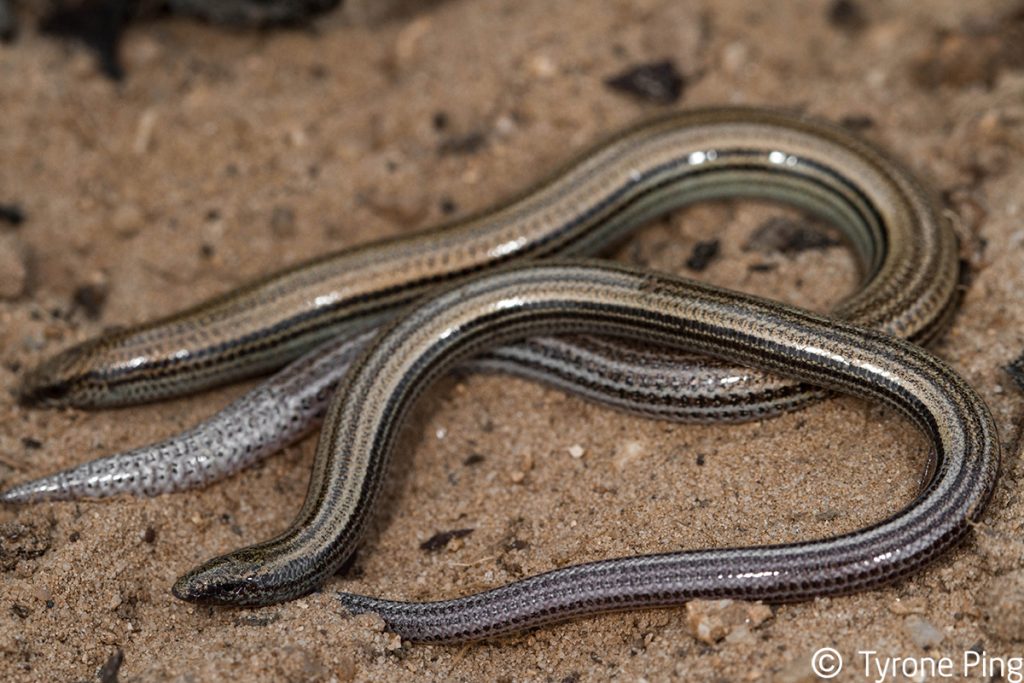 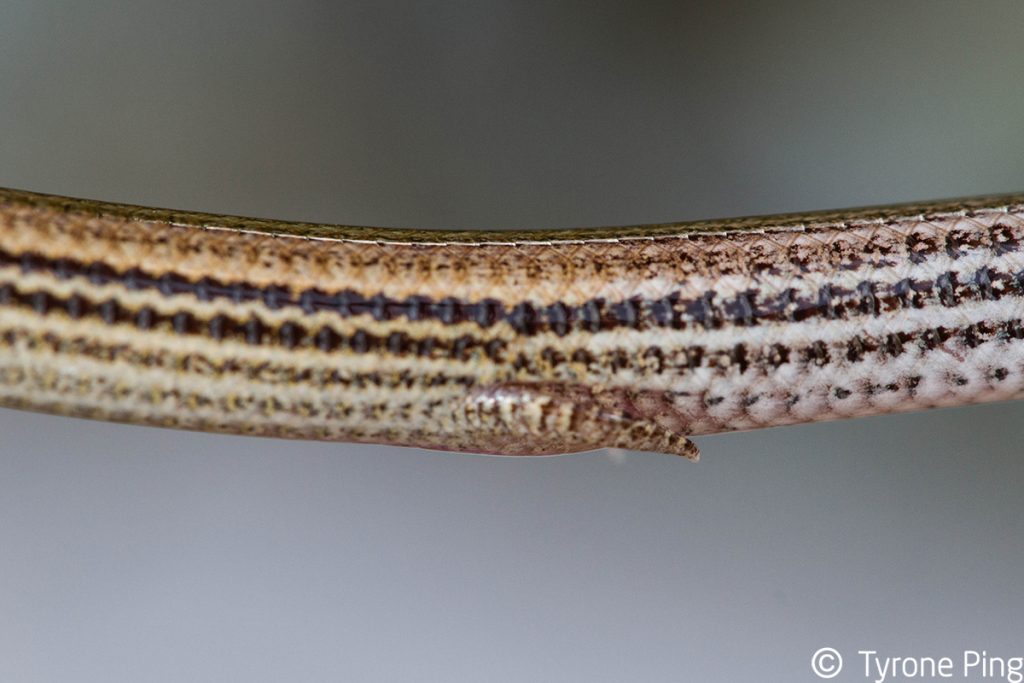 These skinks are well adapted to burrowing in the loose soft soil often bought to the surface by the large amounts of moles here on the West Coast. Theory is the loose sand heats up during the day and allows the skinks to be able to thermoregulate and move freely in the soil without obstructions like roots and rocks to stop them.

After some time we moved to a slightly more promising area  and not long after we had found a handful of specimens mostly Herald Snakes (six or seven), a bunch of Delalande’s beaked blind snake, an exquisite Rhombic Egg Eater , a boldly marked Rhombic Skaapsteker, not surprisingly where you find snakes you find smaller prey animals we also uncovered a few Occelated Geckos  lastly a surprising find of a Spotted Harlequin Snake these snakes although not uncommon always tend to elude me when I’m in the cape. This was the first specimen I’ve photographed in the Western Cape after 5/6 trips so a nice animal to end off in this particular area. 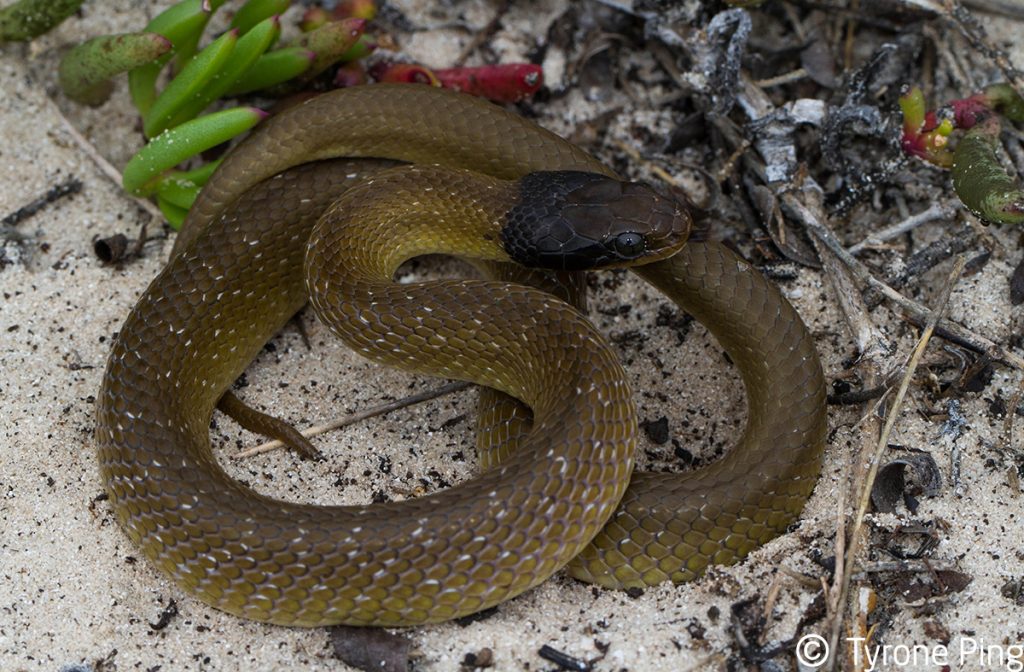 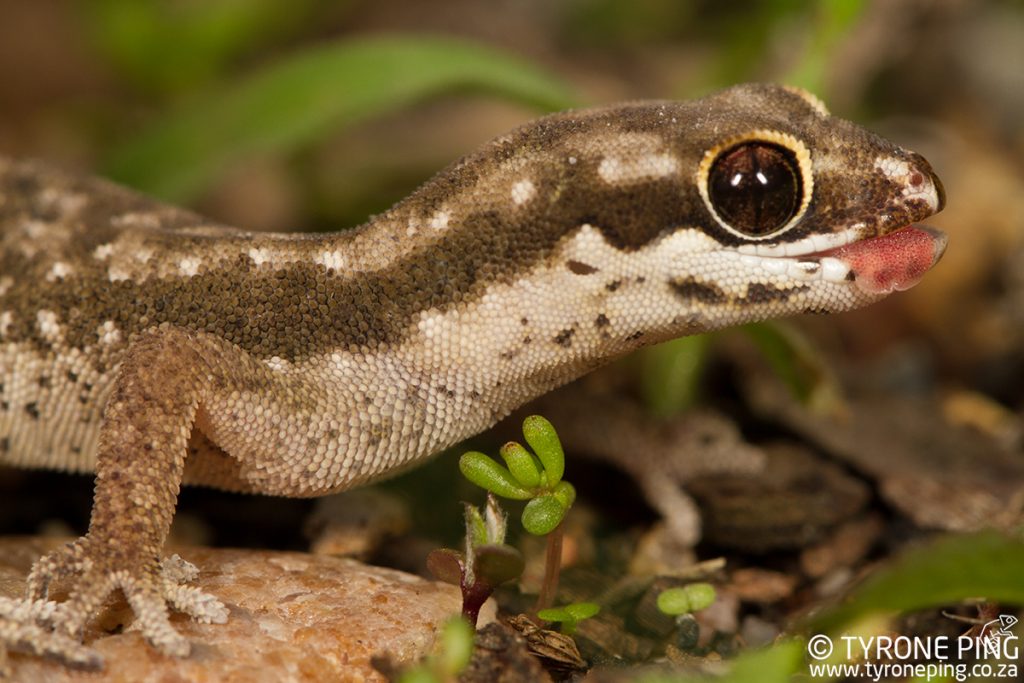 Now after most of the morning has lapsed and the sun had come out in force we headed over to Geelbek restaurant for lunch and replenish ourselves as we still had a another good two or three spots to check out and a number of species still to see in the reserve and hopefully a few more photos to take. We all had a surprisingly good lunch although as usual the Sanparks facilities in a lot of the Western Cape parks seldom disappoint.

We made our way closer to the large coastal dunes where you can often see whales just over the breakers on occasion flanked by dolphins. Not a bad place to scratch around for some reptiles and take in the sights and sounds of the West Coast. I’ve been to this spot a good few times and have seldom been disappointed and more often than note being quite successful here, this time seemed no different.  Andries spotted a “lizard” and clambered over some rocks and had found out first reptile at this point  – which was in fact a new species for him (myself included!)

We continued and managed to  rack up another 4 species of reptile at this spot before moving to our next stop, here are some of the species we found alongs side the Large Scaled Girdled Lizard. 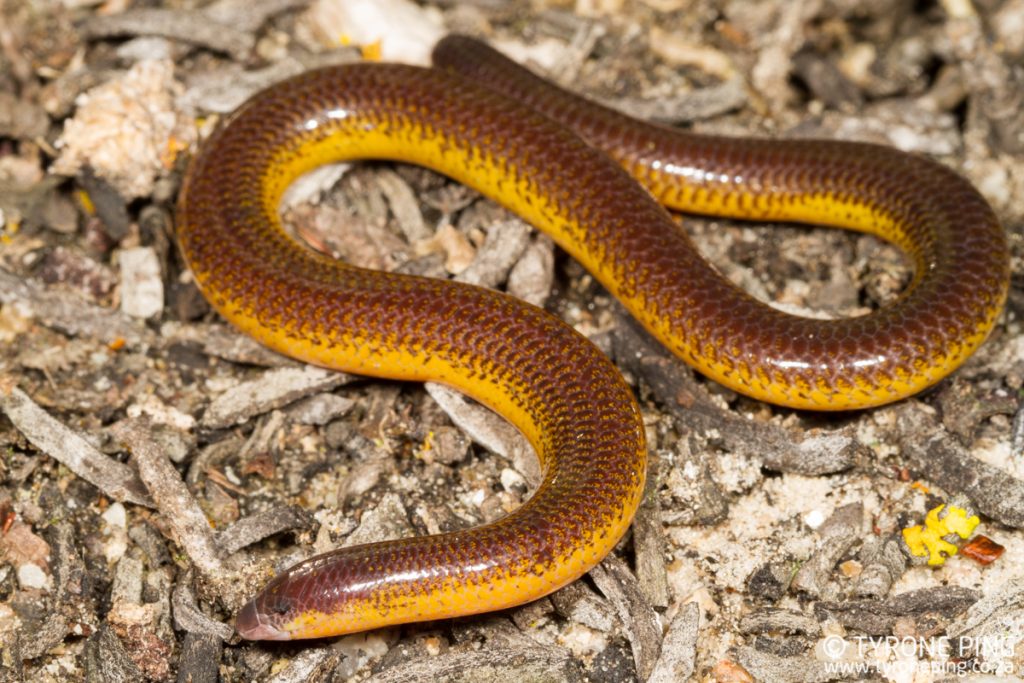 Shortly after we were fortunately enough to find one of the rarer sand snakes, Andries had not seen one previously despite being to the park several times and on a  previous trip I had found one but wasn’t able to get great photographs of the specimen.

We’ve now spent a good few hours in the park and as the light faded we came to the realisation the gates close in 10 minutes so we better back up our gear and head home.
Here’s a few shots from my Instragram  of a few random snapshots

There are 171 different snake species in South Africa and i've been chasing one of these for ages, eventually caught up with one meet the Spotted Harlequin Snake. . . . . . . #vsco #iphoneonly #southafrica

The Following day Andries and I headed to Stellenbosch in search of some of the vibrantly coloured Cape Dwarf Chameleons this small town is known for. We walked the town checking in at the Stellenbosch Botanical Gardens  but no such luck on the chameleon front. We walked around a bit longer when I noticed two lavender plants and after finding a few different species on these in the past gave it and there was a rather bolding marked juvenile Cape Dwarf Chameleon amongst the foliage.

After a relatively small success but still without seeing the green chameleons we’re after we heading to Jan Marais Nature Reserve right in the middle of the town. Andries had good success previously in this reserve and within 5minutes of walking through the gates I spotted this sub-adult Cape Dwarf Chameleon basking amongst the flowers of a “Wild Dagga Bush”. Watching it closely for a few minutes while I got my camera gear in order I witnessed it feeding on a bee and another small flying insect not quick enough to capture it in photographs!

The weather started clouding over and began a short drizzle, not ideal weather for looking for Chameleons, but frogs don’t seem to mind and in the grasslands of the reserve we came across a few Clicking Stream Frogs with the cooler temperatures and rain they were calling from the bases of the grasses and around small pools of water.

Further scratching around turned up a few Cape Legless Skinks (Acontias meleagris) and a handful of Occelated Geckos (Pachydactylus geitje). 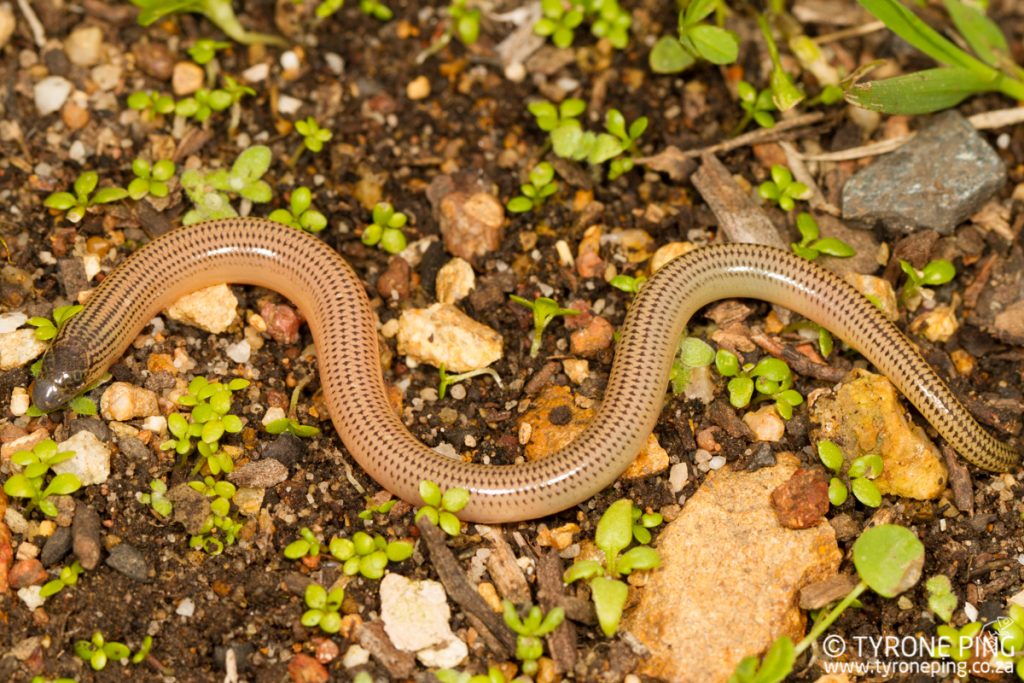 Now after a good few hours trekking around town, photographing specimens, some bush whacking and getting rained on we decided it was time for lunch (around 15:30pm). We walked around again whilst Andries pointed out where he’d once attended lecturers before giving up on that dream. In a student type town the options are rather limited and like much of the student budgets, we were working with one. We stopped by Dominoes Pizza (regrettably) but after all that a warm meal after a long day in the field never goes down badly.  Plotting out next move I scouted some locations from the help of another friend Courtney who’d found some on the outskirts of town a year or so prior.

We waited around for the darkness to set in and anyone will tell you the sun sure takes its time going down in the Western Cape. The spot we’d been told about was not providing any goods and after about 45mins of walking through chest high grasses we headed out and looked into a few willow tree’s adjacent to a vineyard which was going up the side of a mountain. The ideal situation really, when you only have a few suitable trees for animals to live in chances are you’d come right…and then we did! I noticed the tell tale sign of a glowing green shape on one of the upper branches. Now the task of getting to get to get some photos, once again Andires and his tree climbing skills came into play and after a few attempts, we had our hands on the sole purpose of my trip to the Western Cape! Within no time we had found six beautifully coloured adult Cape Dwarf Chameleons. I’ll say they’re by no means an uncommon species at all, in fact perhaps one of the most abundant species after the Eastern Cape Dwarf Chameleon (Bradypodion ventrale).

So again hastily gathered my flash, batteries and camera and finally was able to get some photographs of these vibrantly coloured Dwarf chameleons. Now for some photographs.

Now as luck would have it the very next day we found even more Cape Dwarf Chameleons around Durbanville. During the daylight these chameleons are simply stunning.

A few more sub-adults found in the same Ivy Bush as the first animals we saw on the first night.

Of course, an obligatory voucher shot thanks for the patience Andries! 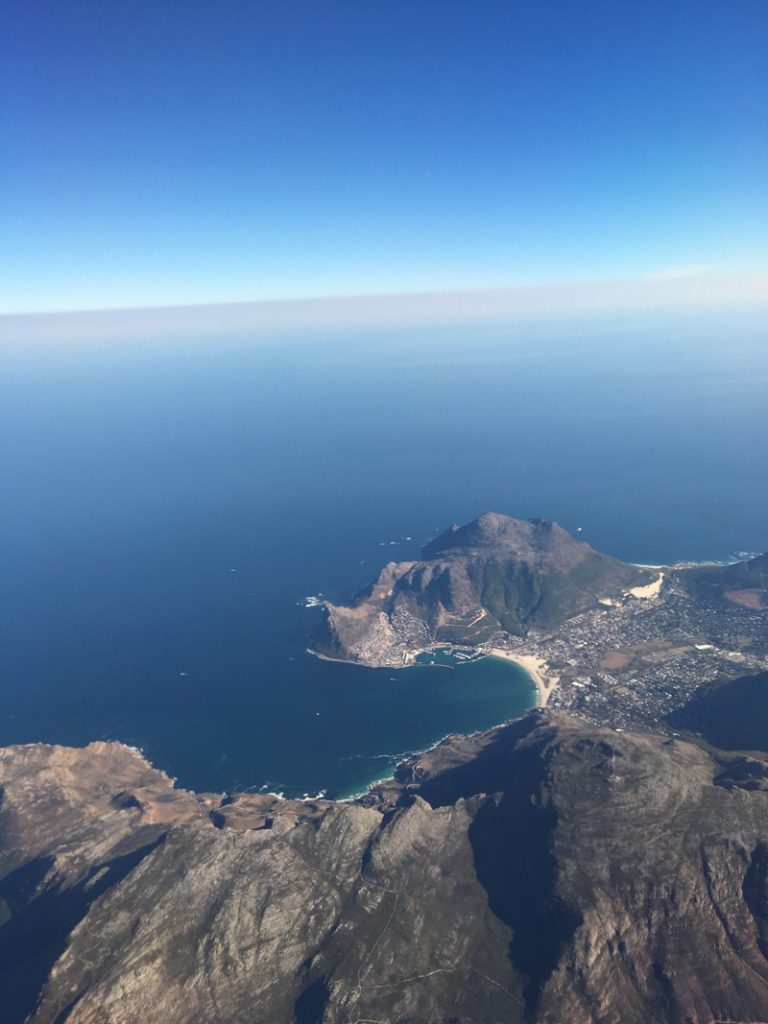