As many of you may know, I am an avid field herper (herpetology), the last few years my main objective has been to find and photograph Bradypodion across South Africa.

Currently, there are 17 described species in South Africa (with only two species not being endemic to the region)

With the addition of my day job finding the necessary days to travel +2000kms is not that easy, I’d had this trip planned on the cards for a while with two public holidays in close succession I was able to take 6 days away from work to target the Bradypodion taeniabronchum.

Now Bradypodion taeniabronchum has a total habitat range of only 5 850km2 oh which only 400kms2 is thought to have suitable habitat for this chameleon to exist in. In 1996 was listed as endangered and by 1998 this status was elevated as critically endangered in the same year.

Finding a needle in a haystack may actually be easier than finding this single specimen.

Spent a lot of time looking at this view:
Blazing sun:

Some mornings were better than others:

Based in Grahamstown for a few days and found some Bradypodion the town is rather abundant with Bradypodion ventrale – Eastern Cape Dwarf Chameleon.

After a successful few days field herping in Grahamstown I set off to Port Elizabeth, in the afternoon so I’d have enough time to survey the habitat during the day, without having to wait all night for it to get dark.

We patiently waited for nightfall, not to waste time found one of these

After a few hours of searching in near gale force winds we were ready to call it a night and chalk this Bradypodion search off as a loss and the 2000kms travelled would have been in vain…untill we spotted this:

Bradypodion taeniabronchum – Note the rich coloration of the gular creases. – 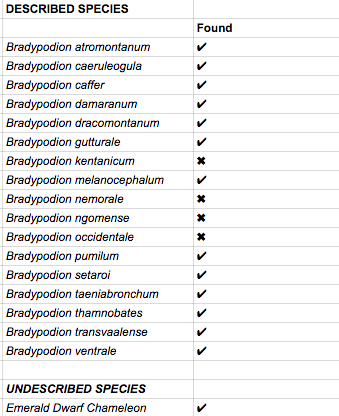 More images over at: tyroneping.co.za